The verification of data is an important aspect when building a data structure on a decentralized network. Participants need a way to reliably distinguish between valid data and malicious information.

Hash functions are one-way mathematical functions used to verify data in blockchains. They are applied in several important ways such as creating an address, proving ownership, and verifying the integrity of the blockchain itself. 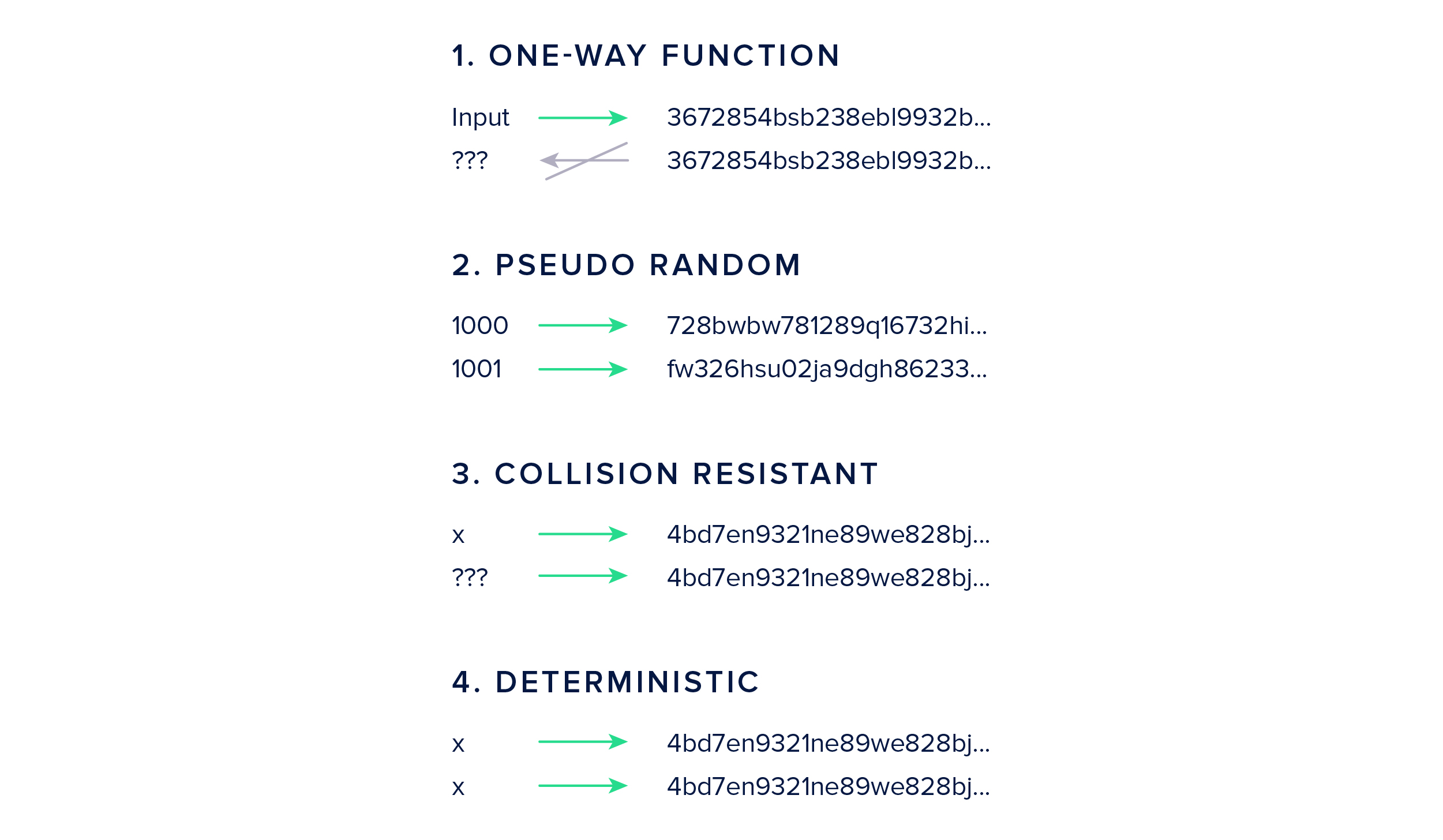 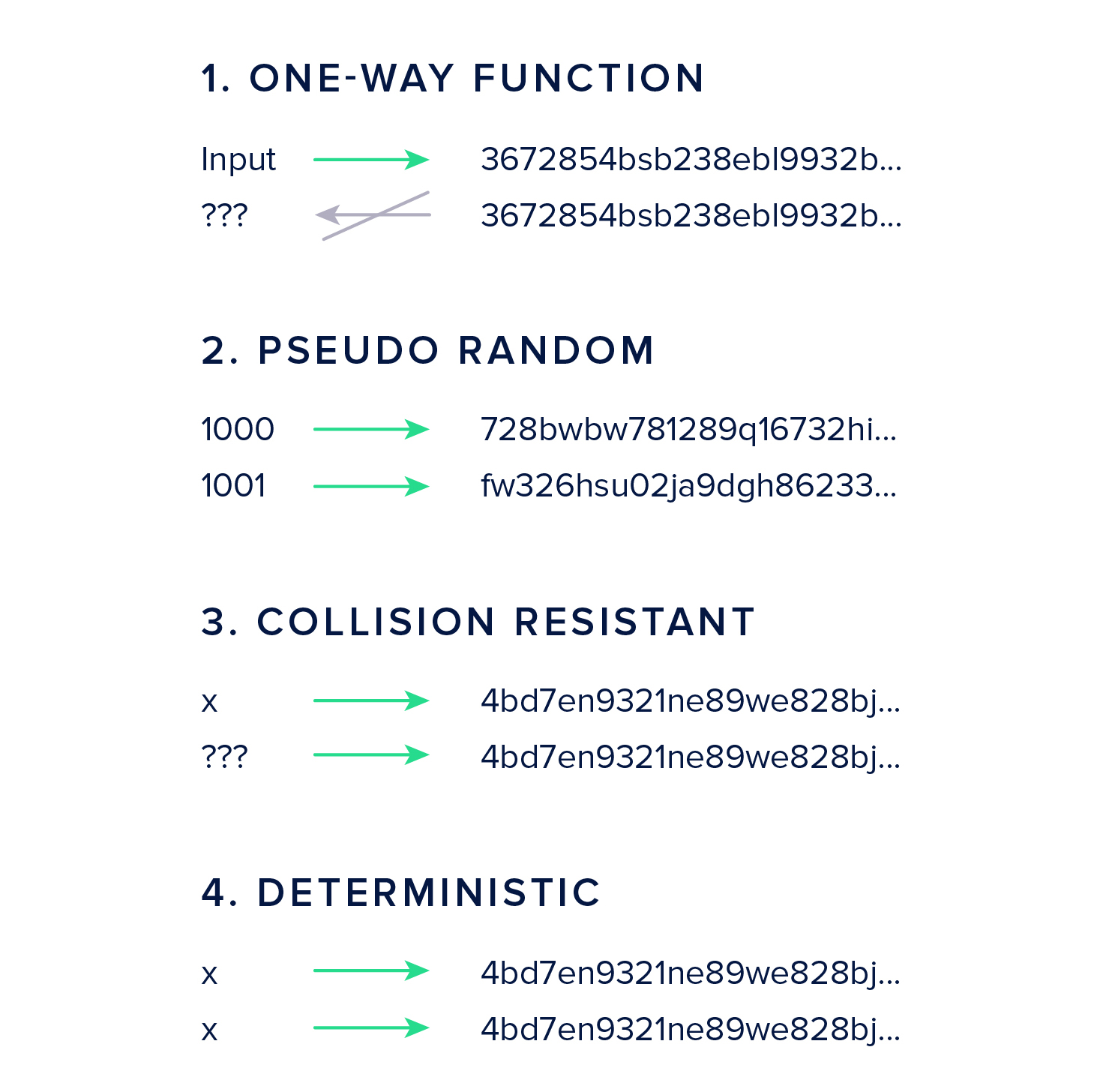 Cryptographic hash functions are pseudo-random. This means one cannot predict the change in the output from a change of the input. Furthermore, a good hash function should map inputs as evenly as possible over its output range. To give you a visual representation: the actual output range of the SHA-256 hash function are the values from 0 to $1.1579 \cdot 10^{77}$ which can be written out as:

The easiest way to imagine the dimension of this number is to play with this interactive scale of the universe and paying attention to the dimensions in the bottom right corner.

Because of the enormous output range, hash functions are almost collision-resistant. It is infeasible to find an input x’ that maps to the same output as another input x. The only strategy would be a brute-force approach, which would take even the most advanced supercomputers thousands of years.

Lastly, hash functions must be deterministic. Hashing a given input must always yield the same output.

Not all hash functions are the same. One differentiator is the output space which affects the collision resistance. If the output space was only 10-bit, performing 1024 hash operations would statistically suffice to find a second input x’ mapping to the same output as x.

Some common types of non-cryptographic hash functions are:

Cryptographic hash functions must possess all properties described in the last section, one-wayness, pseudo-randomness, collision resistance and determinism. The functions require a large output space in order to achieve all the described properties.

Larger inputs are split and the compression function is applied to the fragments in sequence.

In cryptocurrencies SHA-256 (Secure Hash Algorithm 256), RIPEMD 160 (RACE Integrity Primitives Evaluation Message Digest 160), the BLAKE family and Keccak (which is the basis for the SHA-3 family) are the most common hash functions.

In Bitcoin and related protocols, such as Horizen, addresses are obtained through performing a combination of SHA256 and RIPEMD160 protocols on a given public key. One can only speculate why Satoshi made that choice, but most likely he did so to mitigate the risk of one function becoming vulnerable (e.g. one-wayness is broken).

Where are Hash Functions Used?

Hash functions are used for various purposes in blockchains and the examples below are not a complete list.

Hash functions are most often talked about in the context of cryptocurrency mining. This is not necessarily because it is the most important (though a very important) application of hash functions from a technical perspective. It’s also because by now an entire industry has been build around performing hash operations on a large scale.

Miners continuously hash the block header of new blocks, together with a variable, the nonce. The goal is to find a nonce that when hashed together with the rest of the header produces a hash below a certain threshold, the target. When that happens, they broadcast the block to the network and it’s attached to the blockchain.

Using hash functions makes for a good Proof-of-Work because finding a hash below the target is an optimization and approximation free problem.

Being approximation free has the benefit that miners will drop their current block and start working on a new candidate block once the chain is extended by a different miner. The chance of solving the current block within the next minute does not change meaningfully by switching to another block regardless of how long they have been working on the previous candidate.

Another use case for hash functions is creating short, data saving identifiers for blocks or transactions. Block hashes or transaction hashes, usually called Transaction IDs (or TXIDs), can be exchanged for actual blocks or transactions, e.g. when a node is requesting updates from its peers; by only transmitting the TXID first, one saves bandwidth, but only if the requesting node does not have the block in its blockchain already. If the requesting node does have the block in its blockchain the actual data of that block will be transferred.

Hash functions are also used in Merkle trees, a construction used to create a succinct (256-bit) summary of all transactions in a block. This summary is then included in the block header.

Transactions are first hashed and then combined pairwise until a single hash, the Merkle root, is obtained. If there is an odd number of transactions in a given round, the last transaction is interlinked with itself, as you can see with H(C) in the graphic below.

Hash functions are also an important step in the creation of addresses and in the authorization of spending funds via digital signatures. We have dedicated an article to each of those two use cases and will save the description of them for later.

Hash functions are integral to Hash-Locked Contracts (HLCs) and Hash Time Locked Contracts (HTLCs). The idea is to place a lock on a UTXO that is based on a hash value. In order to unlock the UTXO, one has to prove knowledge of the preimage of the hash. Only the rightful owner can choose to reveal the preimage and have another party unlock the UTXO because hash functions are preimage resistant.

There are many other use cases, like privacy features such as Pederson Commitments, which rely on hash functions. Throughout the Expert section, you will come across many more examples.

An entire industry has formed around performing hash functions as efficiently as possible - the mining industry. Not only did the operations actually mining increase in size, but so did their hardware suppliers. To have a competitive advantage one seeks to minimize the electricity consumption per performed hash operation - or rather per quadrillion hash operations - a Terahash.

Specialized hardware optimized for performing hash operations with a single specific hash function only, such as SHA256, are available on the market. These specialized processors are called ASICs (Application Specific Integrated Circuits).

Processors display trade-offs between versatility and efficiency. While CPUs (Central Processing Units) can handle many tasks at low efficiency. GPUs (Graphical Processing Units) are more efficient at certain tasks at the cost of overall versatility. At the other end of the scale, there are ASICs, which are only useful for one specific task, but are highly efficient.

We have an article dedicated to mining at the end of this chapter. We will go into more detail on the intricacies of the mining process from a technical as well as economical perspective.

Hash functions have been battle-tested for many years by now. During those years certain attack vectors have been discovered but they can be mitigated quite easily. We want to give a glimpse into those attack vectors and their mitigation strategies. Note that these attacks do not affect the security of blockchains but only the hash functions in isolation and some outdated applications of them.

In a length extension attack an attacker can use the hash of a message m and the length of m to calculate hash(m, m’), where m’ is a message of the attacker. He doesn’t need to know what m is, just it’s length. The SHA-2 family is vulnerable to this type of attack. There are no known exploits of this vulnerability in cryptocurrencies, but in order to protect against potential threats, most operations that involve hashing are performed twice in a row. An example would be constructing Merkle trees. In the graphic used earlier, you can see that the hash function H is denoted as the double hash, SHA256(SHA256()).

Another known attack on hash functions is the Birthday Attack. It exploits the mathematics behind the birthday problem in probability theory to find collisions in hash functions more efficiently. The birthday problem describes an interesting property regarding a group of people and their birthdays. In a group of 367 people, the probability of two of those people sharing a birthday is 1, as there is one more person than days in a leap year. However, with just 23 people in the group, the chance of two of them sharing a birthday is already at 50%, while it reaches 99.9% with just 70 people.

This relates to hash functions in that finding collisions in hash functions efficiently opens up potential exploits. The Birthday Attack reduces the number of required hash operations to find a collision (two inputs producing the same output).

We would like to address the concern that quantum computers could one day break the security of hash function-based cryptographic schemes. We quote a section of a well-written article on the state of hashing algorithms by Raul Jordan to address the quantum-threat:

“What quantum computation will be able to break are those problems which have rigorous, underlying mathematical structure founded by neat tricks and theory such as RSA encryption. Hashing algorithms, on the other hand, have less formal structure in their internal constructs.”

“Quantum computers do give an increased speed up in the computation of unstructured problems such as hashing, but at the end of the day, they would still be brute forcing an attack the same way a computer today would attempt to do so.”

For the foreseeable future, hash functions will continue to present a useful cryptographic primitive that more advanced applications can be built upon.

Hash functions take different length inputs and compute fixed-length outputs. There are many use cases for hash functions but to be useful for cryptographic applications they need to be collision-resistant, preimage-resistant and pseudo-random.

Hash functions play an integral part in blockchain technology. They are the basis of the mining algorithm used to create new blocks, are used to create succinct transaction and block identifiers and are applied when deriving addresses from public keys.

Because mining has become an entire industry, Application Specific Integrated Circuits (ASICs) for performing hash operations on a large scale have been developed.

While there are attack vectors, these are mitigated by using the same hash function sequentially or using two different hash functions after another.

In our next three articles, we will take an in-depth look at public-key cryptography.

The State of Hashing Algorithms

― Raul Jordan
An article covering the evolution of hashing algorithms and their application. The author gives an outlook into a future where quantum computers are readily available and provides plenty of other references.
https://medium.com/@rauljordan/the-state-of-hashing-algorithms-the-why-the-how-and-the-future-b21d5c0440de

The Cost of ASIC Design

― IfDefElse
This article provides insights on the ASIC development process and the cost it incures.
https://medium.com/@ifdefelse/the-cost-of-asic-design-a44f9a065b72
English Español Français