Since the goal of the original blockchain design was to enable a new and fair form of money, it would be great to be able to actually own money in this system, wouldn’t it? There must be a concept of identity to have ownership on the blockchain - you cannot have ownership if there is no representation of the owner. 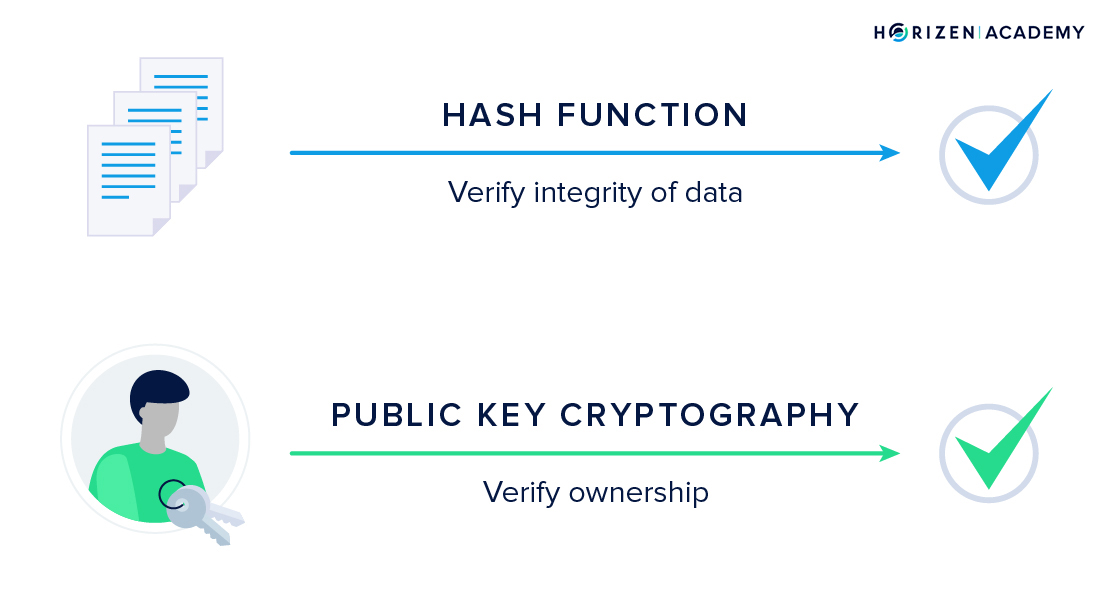 Let’s take a step back and start from the beginning. The basis of public-key cryptography is private keys, public keys, addresses, and digital signatures. When you own some cryptocurrency, the blockchain contains a record that there are some coins associated with your public key. You must provide a digital signature to authorize the spending of those coins. You can only provide this digital signature if you are in the possession of the private key that corresponds to the public key. 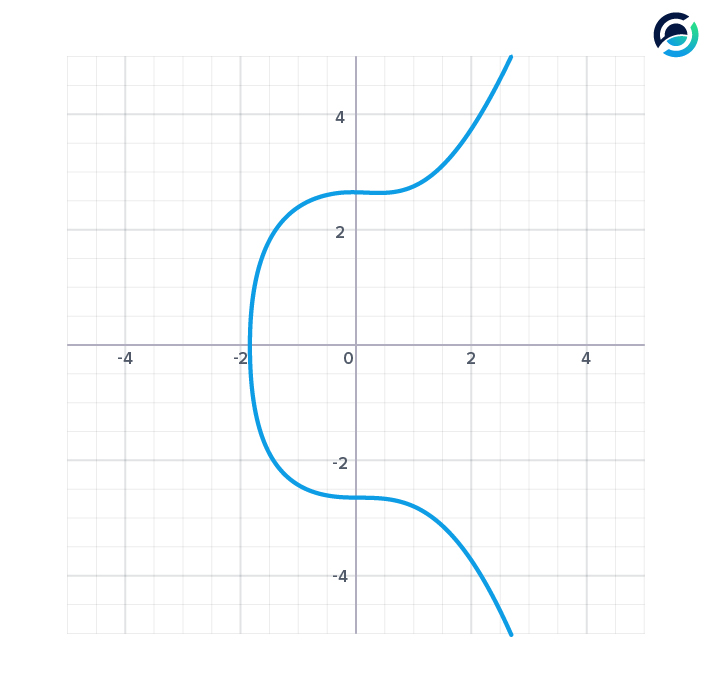 Bitcoin, Ethereum and many other currencies use a curve called secp256k1 and it looks like the one on the left. The equation for this curve is y^2 = x^3 + 7. What makes elliptic curves useful is that you can do math with them, and the math you do on the curves has some special properties. 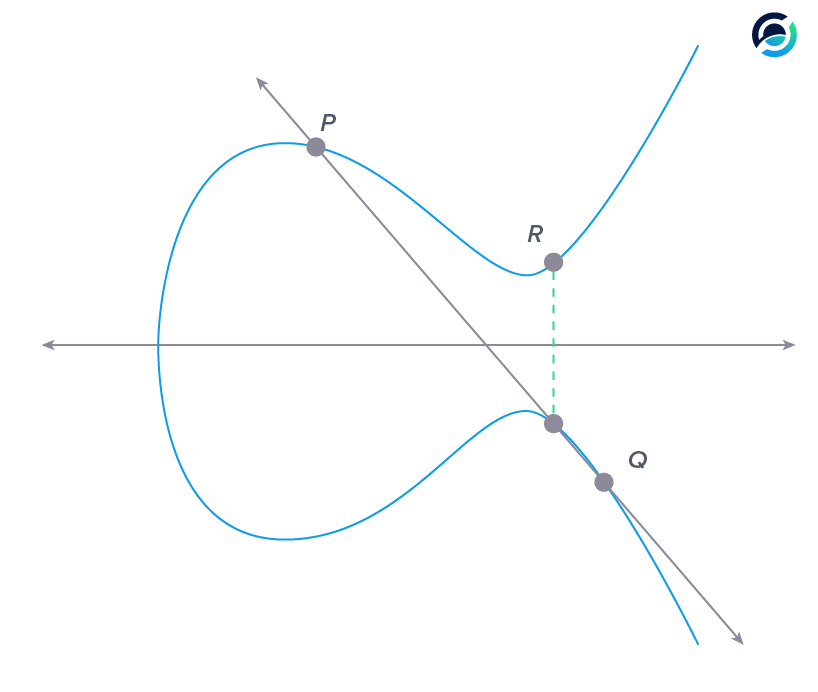 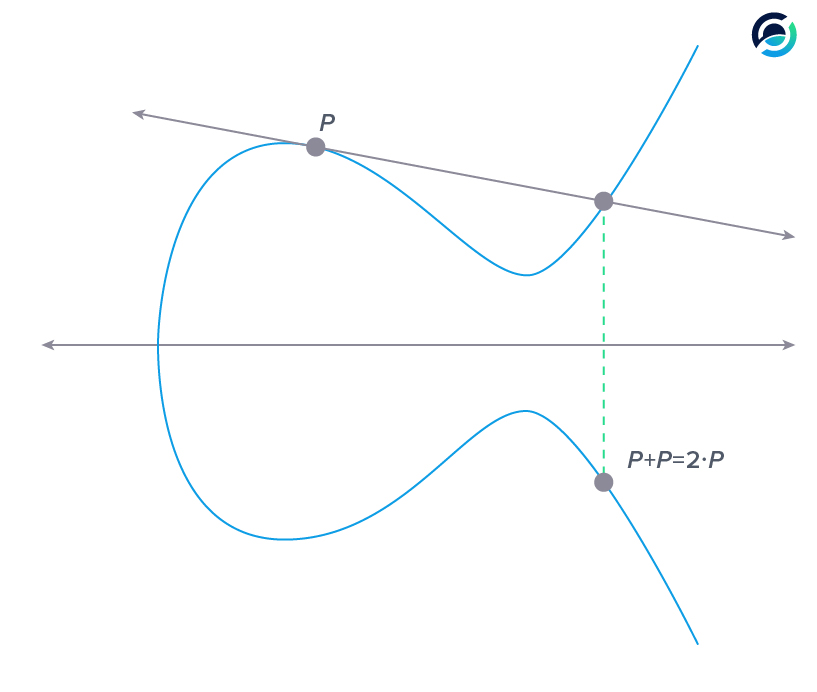 When we want to multiply a point on the curve we must add it to itself. To multiply point P by two we add it to itself once. In this case, we can't really connect two points, so we go for the tangent line (the one with the arrows). 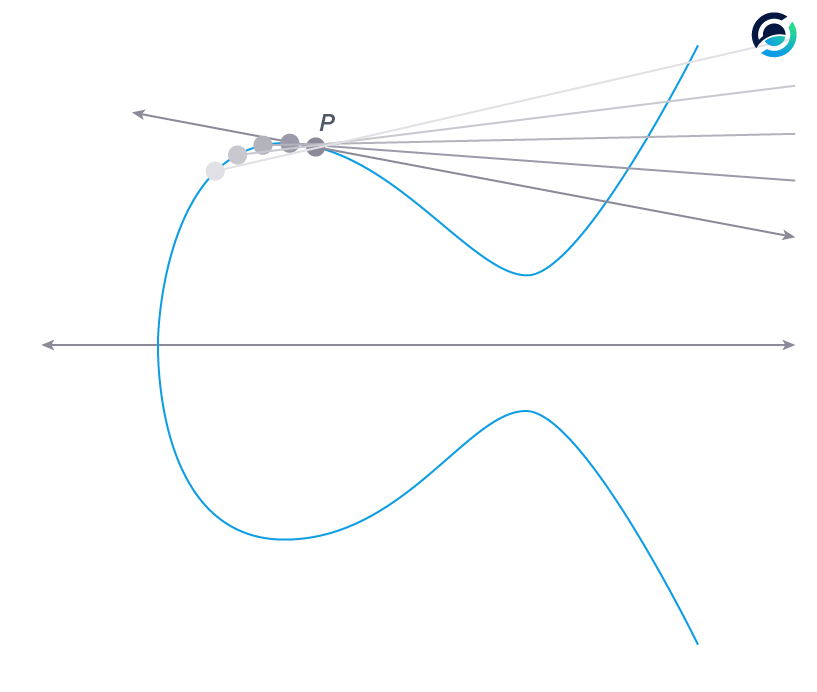 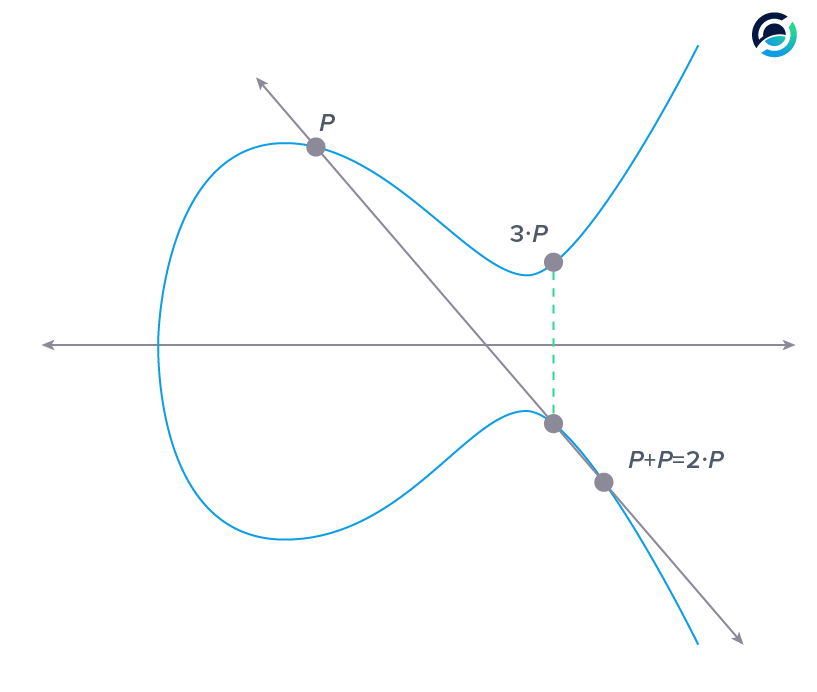 The key takeaway is that multiplying a point is an easy task - it is just addition of points to themselves. The interesting part is that division on the curve is a computationally hard problem. There is just no algorithm to calculate how many times P was added to itself or in terms of multiplication by what number it was multiplied in order to get to a certain point. This is already enough to understand the basic concept of public-key cryptography based on elliptic curves.

Next, your public key is derived from the large, random number you have generated as your private key. This is where we need to multiply points on the curve. As we said earlier, adding points together on an elliptic curve is straightforward. Bitcoin uses a base point on the curve for every key pair. 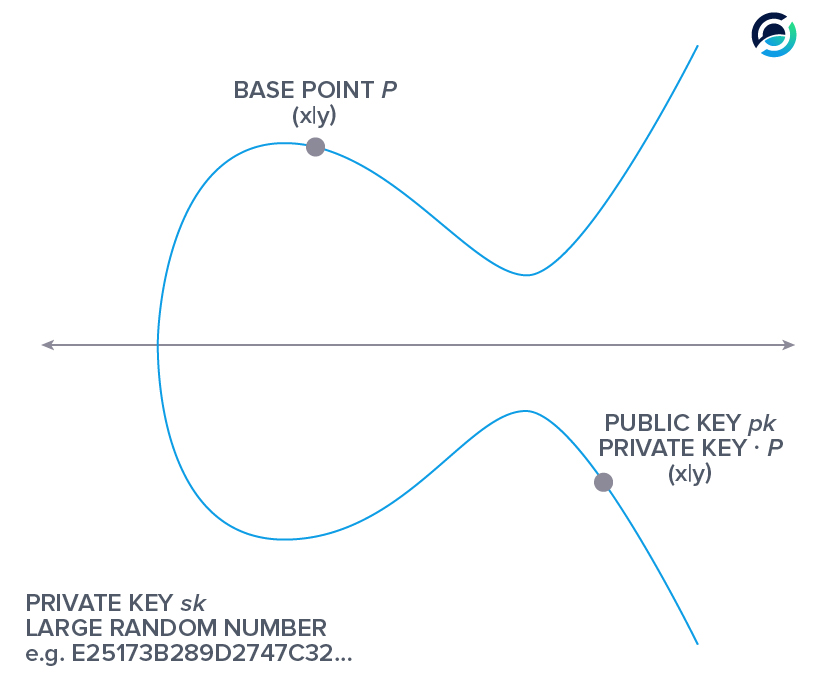 To recap: Your private key is a large random number. Your public key is a point on the elliptic curve that you get when you multiply the base point P with your private key.

A property that is necessary for any public-key cryptographic scheme, is that it is computationally infeasible to derive the private key from the public key. It is easy to calculate the public key, a point on the curve, by multiplying the base point P with a large random number (your private key). But if an adversary knows the base point P and your public key, he cannot divide them and say how many times P was added to itself to get your public key.

At this point, your public key is pretty large, 512 bit, and it is easy to compress it to half the size. The elliptic curve is symmetric about the x-axis. There are only two possible y-values for every x-value that only differ in their sign (being positive or negative). If you leave out the y-coordinate and add the information of the point having a positive or negative value for y, the public key becomes half the size but carries the same information.

Lastly, to get your address, your public key is hashed. First, using the SHA256 hash function and a second time using RIPEMD160. After adding a byte to state if this address will go to the main- or test-net and calculating a checksum there is a final step before you get your address.

When we look at how a computer is working at the hardware level it is zeros and ones. Data is always stored in a binary format no matter what type of data you’re looking at (images, sound files, and even your bitcoin address). There are different ways to convert a string of bits into data that humans can digest. Humans do best with a string of numbers or alphanumerical characters.

Base58Check is a way to convert bits into alphanumeric characters, but it excludes the four characters 0, O, I, and l. Base58Check removes these characters from your address to reduce errors when copying addresses manually and proofreading them.

You can generate as many addresses as you like from a single private key, and wallets do this for you automatically. It is a feature to enhance your privacy, as it makes it harder for a third party to link all your payments together. We will talk about this concept and how it works with change addresses in the chapter on privacy on the blockchain.

To wrap up this article we want to come back to digital signatures. You might hear that your keys are used to encrypt and decrypt messages. This is true, but it is not why we use public-key cryptography on the blockchain. The information contained within transactions is not encrypted in any way. It is available to anyone on the blockchain, which makes the system so transparent.

What your private key is actually necessary for on the blockchain is signing transactions. You can only spend funds you received in a transaction if you provide a digital signature that proves your knowledge of the private key corresponding to the address used to receive the funds.

We cover how digital signatures work and how you can prove that you know the private key without revealing any information about it in our Expert Section. We combine the concept of hash functions and point multiplication on the curve for this. Although it is not exactly rocket science it is a rather complex matter.

When you set up a wallet the software will first generate a large random number that is your private key. The base point P on the elliptic curve is multiplied with your private key to get your public key, another point on the curve. Your public key is then hashed and the characters I, l, 0 and O are removed to improve readability. To spend your money you need to provide a digital signature that proves your knowledge of the private key that belongs to your address.

Our next article is about the Peer-to-Peer network: The infrastructure public blockchains are built upon.

How to create a Bitcoin wallet address from a private key

― Timur Badretdinov
An article outlining the different steps from private key to wallet address including the corresponding code in python.
https://medium.freecodecamp.org/how-to-create-a-bitcoin-wallet-address-from-a-private-key-eca3ddd9c05f

What is the math behind elliptic curve cryptography?

― Hans Knutson
Hans does a brilliant job at explaining the connection between private key, public key, address and digital signature in this article.
https://hackernoon.com/what-is-the-math-behind-elliptic-curve-cryptography-f61b25253da3

― Andrea Corbellini
Also Andrea calls it a gentle introduction this is an article for those of you that really care about the math behind ECC.
https://andrea.corbellini.name/2015/05/17/elliptic-curve-cryptography-a-gentle-introduction/
English Español Français