What is a Layer 0 Blockchain?

What is a Layer 0 Network?

Over the past 3 years, the cryptocurrency ecosystem has seen an explosive growth in new and innovative projects offering novel ways to deliver banking services, exchange digital art, trade financial products and more. Underpinning this boundless innovation in crypto-based products has been the constant improvement of blockchain infrastructure to support secure, scalable and decentralized applications. The most notable examples of this can be seen on blockchains like Ethereum and Solana.

These blockchains are categorized as ‘Layer 1s’ because they serve as the infrastructure for developers to build and launch decentralized applications or Dapps that are tethered to the underlying consensus rules of their host blockchain.

The adoption of these layer 1 networks and value of their native cryptocurrencies have skyrocketed as a result of users interacting with hundreds of popular Defi, NFT or gaming Dapps that exist on their infrastructure.

The Problem with Layer 1s

As the demand for Dapps increases and more capital flows into the space to support development, we are beginning to see the growing pains of layer 1 networks as they struggle to meet the needs of developers and end users who have opposing views on whether dapps should prioritize scalability, security or decentralization.

Layer 1 networks are built with a monolithic architecture. This means that the execution, consensus and data availability layers are all functioning within a single blockchain network. This stacked design places a strain on the system and results in the need for blockchains to comprise decentralization for security, or scalability for decentralization.

In addition, the lack of control over the underlying infrastructure that dapp developers build on top of has also been a cause of much frustration. Rising gas fees on the Ethereum network make all ethereum dapps too expensive to use, while unexpected downtime on the Solana network similarly makes all dapps on Solana also go offline.

Dapp developers must also make compromises in how they design their dapps in order to remain compatible with these L1 networks, and lack the ability to explore different consensus mechanisms or to experiment freely with token incentive models because consensus is a primary function of the L1 infrastructure layer. The overdependence on L1’s and difficult tradeoffs imposed by the scalability trilemma can only be remedied by creating a new base infrastructure that empowers developers to launch their own independent blockchains that can be optimized for different aspects of the scalability trilemma.

This base infrastructure is called layer 0, and it is the single most important component for helping blockchains and decentralized applications achieve limitless scalability while maintaining the highest possible levels of decentralization and censorship resistance.

What is a Layer 0 Blockchain?

A layer 0 is a type of protocol that enables developers to launch multiple layer 1 blockchains that can be designed to each serve a specific purpose and cater to 1 or 2 dimensions of the scalability trilemma as opposed to all 3.

These L1 networks can also be made to communicate with each other such that the end user can have the experience of using one blockchain while they are in fact using multiple.

Layer 0 (L0) networks are equipped with software development tool kits or SDKs that allow developers to launch their own blockchains, known as Layer 1s or L1s or sidechains, that are connected to the L0 mainchain but operate independently.

We can think of this like an infrastructure for launching new blockchains like the Bitcoin network or the Ethereum network. Examples of L0s include Horizen, Cosmos and Polkadot.

Each L0 comes with its own unique implementation and approach for developers to launch their own blockchains.

Why are Layer 0s Necessary?

As mentioned before, the scalability trilemma is a series of trade-offs between decentralization, speed/scalability, and security that one must make when designing a blockchain and constructing rules for its on-chain governance.

It is very difficult, if not impossible, to achieve perfect decentralization without compromising scalability, and vice versa. This is especially true on a monolithic blockchain where all the critical functions like transaction execution, consensus and data availability (the ability to verify that all the data from new blocks has been published) are managed by a single network, increasing the likelihood of congestion and making it much more difficult to scale.

A workaround to the scalability trilemma is to delegate the primary responsibility for these 3 functions to different independent blockchains. This design ensures that the execution chain can be optimized for handling high TPS dapps like a DEX or play-to-earn game without worrying about decentralization. A second chain can then be optimized for decentralization and serve as a final consensus layer for the execution chain to enable withdrawals to and anchor its data.

For example, the Horizen network is a layer 0 protocol in which a single blockchain launched using its Blaze SDK can produce up to 1,000 transactions per second. However, the protocol can manage up to 10,000 blockchains running at the same time in parallel, which means it has a transaction throughput of up to 1 million.

What makes an independent blockchain truly independent is having its own set of validator nodes to confirm transactions and produce blocks based on their own consensus mechanism.

As a developer, the ability to develop your own blockchain from scratch means that you can:

What’s more, thanks to the SDKs of L0 protocols, the time and complexity of launching a blockchain on a L0 network can be compared to launching a Dapp on an L1, which means you can build and manage multiple L1s with relatively little effort.

Interoperability is the ability for computer systems with different programs to interpret and exchange information with each other with minimal friction. The perfect analogy for understanding the importance of interoperability in the blockchain space is to think about blockchains as large cities that need to be connected via bridges in order for economic activity to flow in and out.

Layer 0 networks use various different iterations of a cross-chain transfer protocol to enable tokens and other forms of data to be transferred:

Cosmos, a layer 0 network, uses a mechanism called the Inter-Blockchain Communication protocol (IBC), where layer 1 blockchains called ‘Zones’ can communicate and transfer value between each other using the mainchain ‘HUB’ as a central checkpoint and intermediary.

Horizen uses its Cross-Chain Transfer Protocol (CCTP) to enable side chains to communicate and transfer tokens to the mainchain and between other sidechains.

How Does a Layer 0 Work?

The 3 main components of a Layer 0 protocol are: 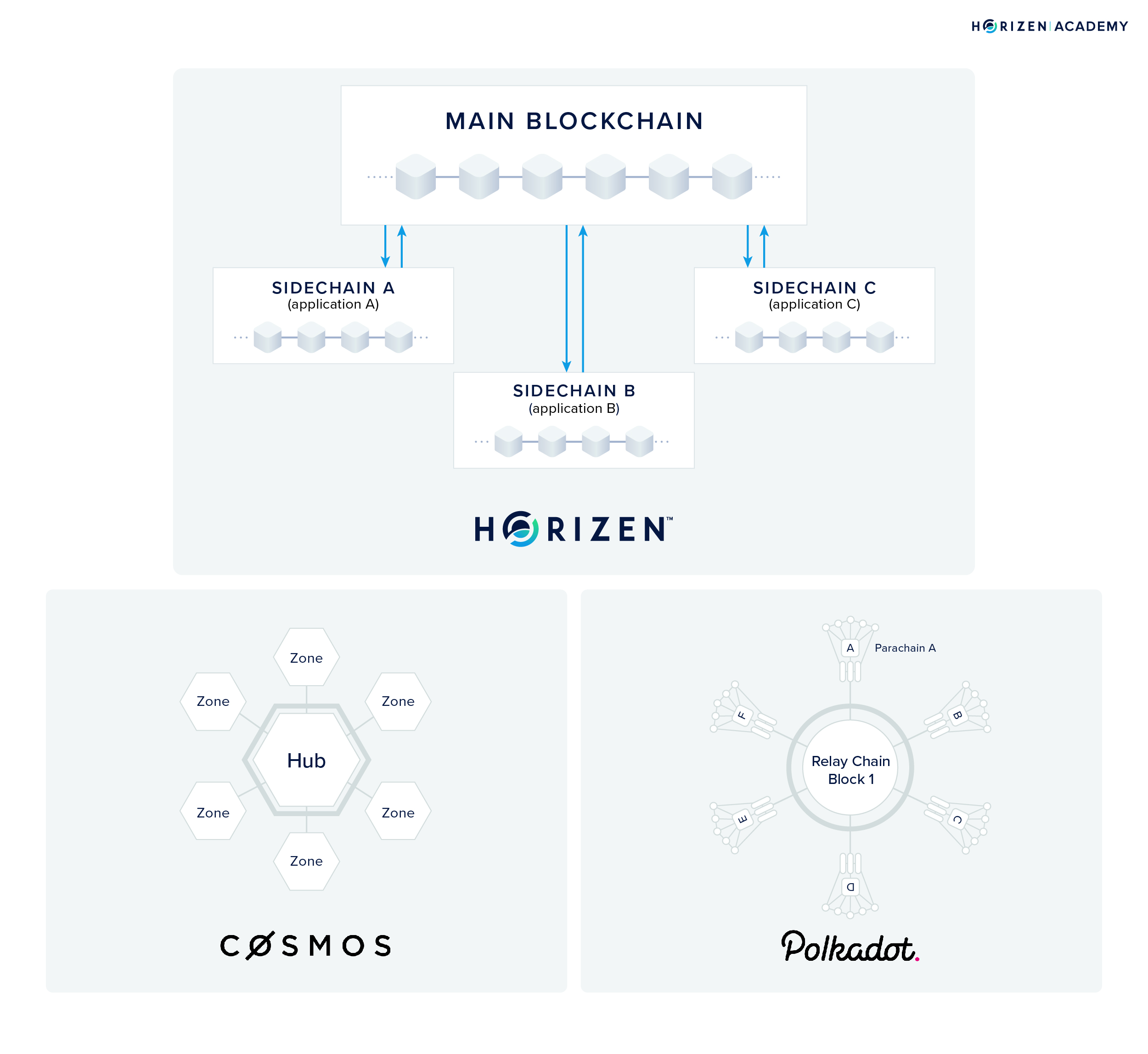 Today, there are a handful of notable L0 networks that are ushering in a new era of highly customizable and scalable blockchains.

*** Development & Adoption Metrics at the Time of Writing

What Makes Horizen the Top Choice for L0s?

As a zero-knowledge enabled network of blockchains, Horizen is leveraging the latest privacy technologies to enhance the utility and scalability of blockchain networks.

Horizen’s sidechain system Zendoo employs a form of zero knowledge proofs called zk-SNARKs, which uses special cryptography to enable users to make transactions from a sidechain to the mainchain without the details of the transaction being known to the nodes that validate them.

Designed with Enterprise Adoption in Mind

Through ZKP technology, enterprises are able to safely utilize public blockchain networks to send and receive data without revealing any sensitive information.

Horizen has also created a special auditing solution called ‘zkAudit’ to enable audits to be performed on private companies in a completely decentralized, transparent, and privacy-preserving manner through ZKPs. 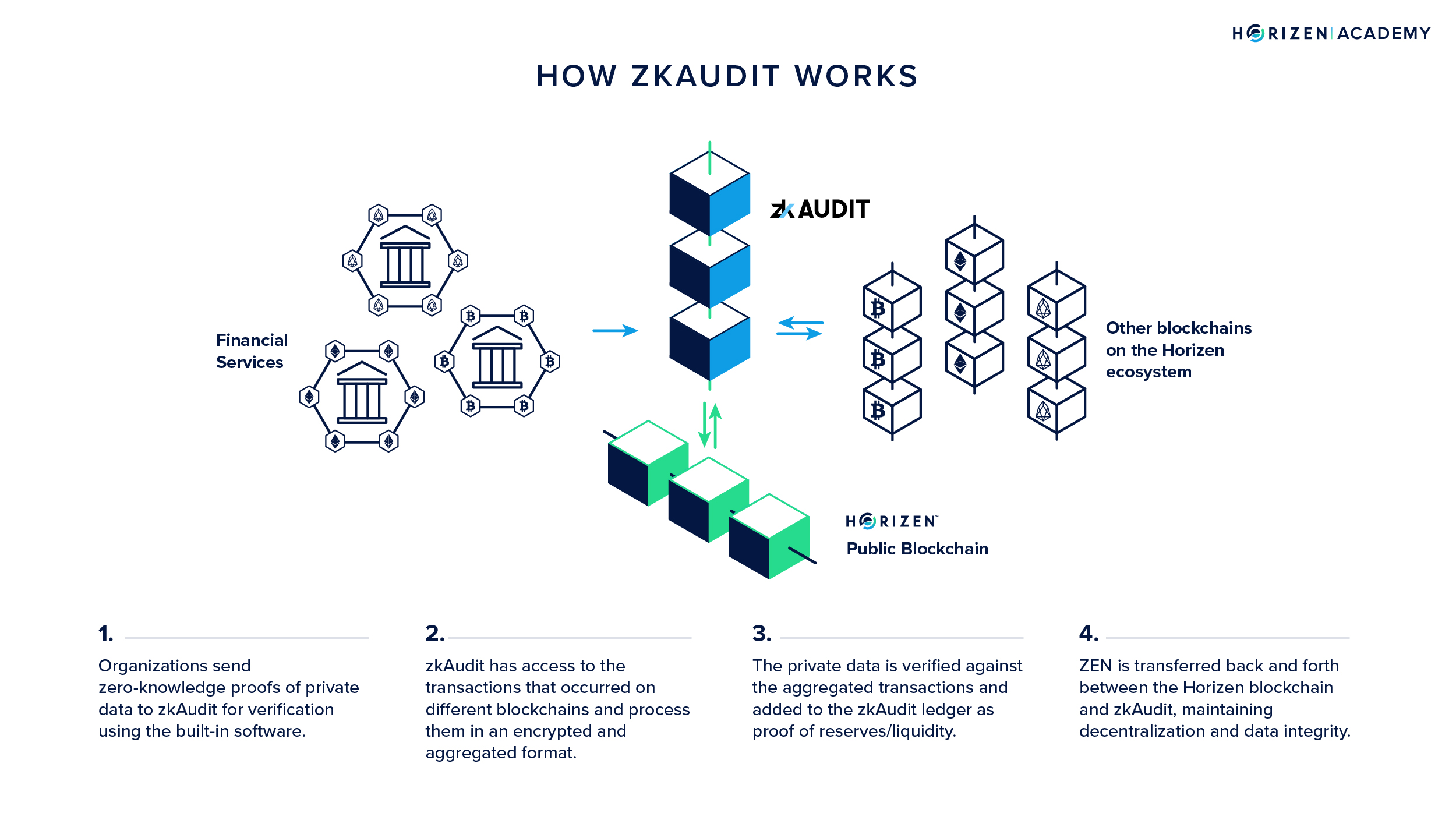 The size of the global enterprise data management market is expected to reach $135.8 billion by 2027. Additionally, the global cloud computing market size is expected to reach $1.25 trillion by 2028. These massive figures represent the value of large multinational corporations hosting and sharing data across global supply chains and digital networks.

Horizen’s specialization in privacy preserving technologies makes it perfectly positioned to capture this value as enterprises begin to transition to storing data on blockchains in order to increase security and transparency while maintaining privacy.

Zendoo enables developers to build independent and highly customizable blockchains that can be set up to work with any consensus mechanism, including PoS, PoH, pBFT, DAG, etc. Being consensus agnostic ensures that the Horizen’s network can come as close as possible to achieving perfect asymmetry between scalability, decentralization, and security as possible.

The Horizen team has built a more secure version of the proof-of-work consensus mechanism for their mainchain network, leveraging what we call a ‘penalty system for delayed block submission’ to enhance protection against 51% attacks. No matter the level of decentralization of a sidechain, once the sidechain transaction data is verified by the mainchain, it becomes anchored to the same security model as its modified proof-of-work consensus mechanism.

In conclusion, Horizen is an early entrant into the layer zero space yet is offering some very clear differentiating features, such as its focus on privacy, consensus agnostic sidechains and enhanced proof of work security model for its mainchain.