The distributed network of a blockchain comprises many thousands of participants - some of them altruistic, others rational, and some of them malicious. In this challenging environment, one has to solve a crucial problem to make digital money work: all nodes need to agree on a single history of transactions. Without consensus on who owns what, the network would be worthless.

There are many approaches to achieving consensus in a distributed network but the two most commonly used ones are the Proof of Work (PoW) and Proof of Stake (PoS) algorithm. The generalization Demiro Massessi has formulated applies to both:

“The main difference between consensus mechanisms is the way in which they delegate and reward the verification of transactions. (…) In one way or another, blockchain consensus algorithms boil down to some kind of vote where the number of votes that a user has is tied to the amount of a limited resource that is under the user’s control.” - Demiro Massessi 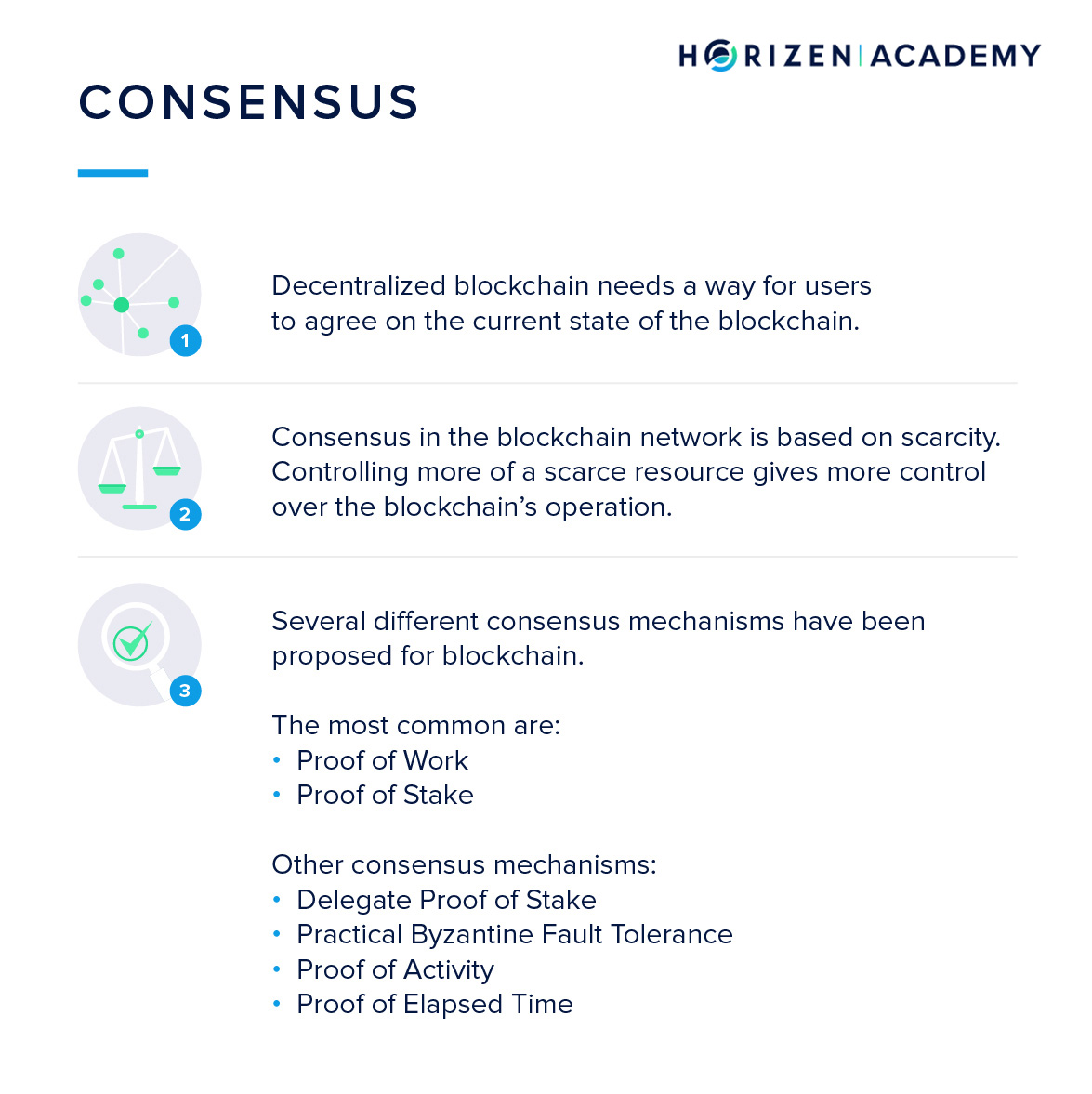 Miners are the entities who work to achieve consensus within the network in a Proof of Work blockchain. They collect all transactions that are forwarded to them through the P2P network and save them in their mempool (memory pool). While they collect incoming transactions, they verify if the transactions are valid according to the protocol and add them to the block they are currently working on. At the same time, they are solving a computationally expensive puzzle. We will cover what this puzzle actually is in the next article on mining.

The miner who solves the puzzle first broadcasts her block to the network and gets to extend the blockchain by one block. The miner receives newly created coins for his work and he gets to write the history of the blockchain for the past couple of minutes. In Horizen this happens every 2.5 minutes on average, in Bitcoin every 10 minutes. The chance of solving a block is directly proportional to the computational power a miner has. If a miner had 10% of the computing power of the network, she would solve every tenth block on average.

Computational power is the limited resource in a PoW-based blockchain. It takes real-world resources, namely mining hardware and electricity, to mine a cryptocurrency. It is a highly competitive environment, in which each miner constantly wants to increase his share of the computational power or hash rate. This competition is what keeps the chances of a single actor controlling the majority of hash rate low.

Miners require computational power because the problem they are trying to solve can only be solved through random guessing. PoW only works, because this puzzle is optimization-free and approximation-free. Optimization-free means there is no shortcut to trying out a large number of different solutions until you find a valid one. You cannot calculate a solution, you need to find it through a trial-and-error approach. Approximation-free means that it is not possible to have a part of the solution or to “be close to solving the problem”. You either have a solution or not, making it a binary situation.

All nodes and miners verify the validity of a new block as soon as it is discovered and broadcast. If it is valid, they add it to their local copy of the blockchain and delete all transactions that are now already recorded on the blockchain from their mempool. The mempool only ever contains valid but unconfirmed transactions. Then they start working on the next block and the process is repeated. This is how the network agrees on a single version of the history of all transactions in a Proof of Work blockchain.

Now you can imagine a scenario in which two miners find a block at almost the same time. In this case, all the nodes and miners on the network save both versions of the block. This is a tie situation: both blocks are valid at this point, but somehow the tie must be broken - we need a single version of the truth.

The miners will start building the next block on top of the block they received first. The tie is broken when the miners find the next block. The block that is built on top of will become accepted as the single truth by all miners and nodes. The other block is disregarded and called an orphan block. This procedure of breaking a tie between to concurring blocks is called the Longest Chain Rule or Nakamoto Consensus.

If 80% of miners receive block A first and the other 20% block B, then the chances of block A getting extended are 80% (assuming all miners have the same computational power). In a way, the miners vote with their computational power on one version of the history. This aligns perfectly with our quote from the beginning of the article:

“In one way or another, blockchain consensus algorithms boil down to some kind of vote where the number of votes that a user has is tied to the amount of a limited resource that is under the user’s control.” - Demiro Massessi 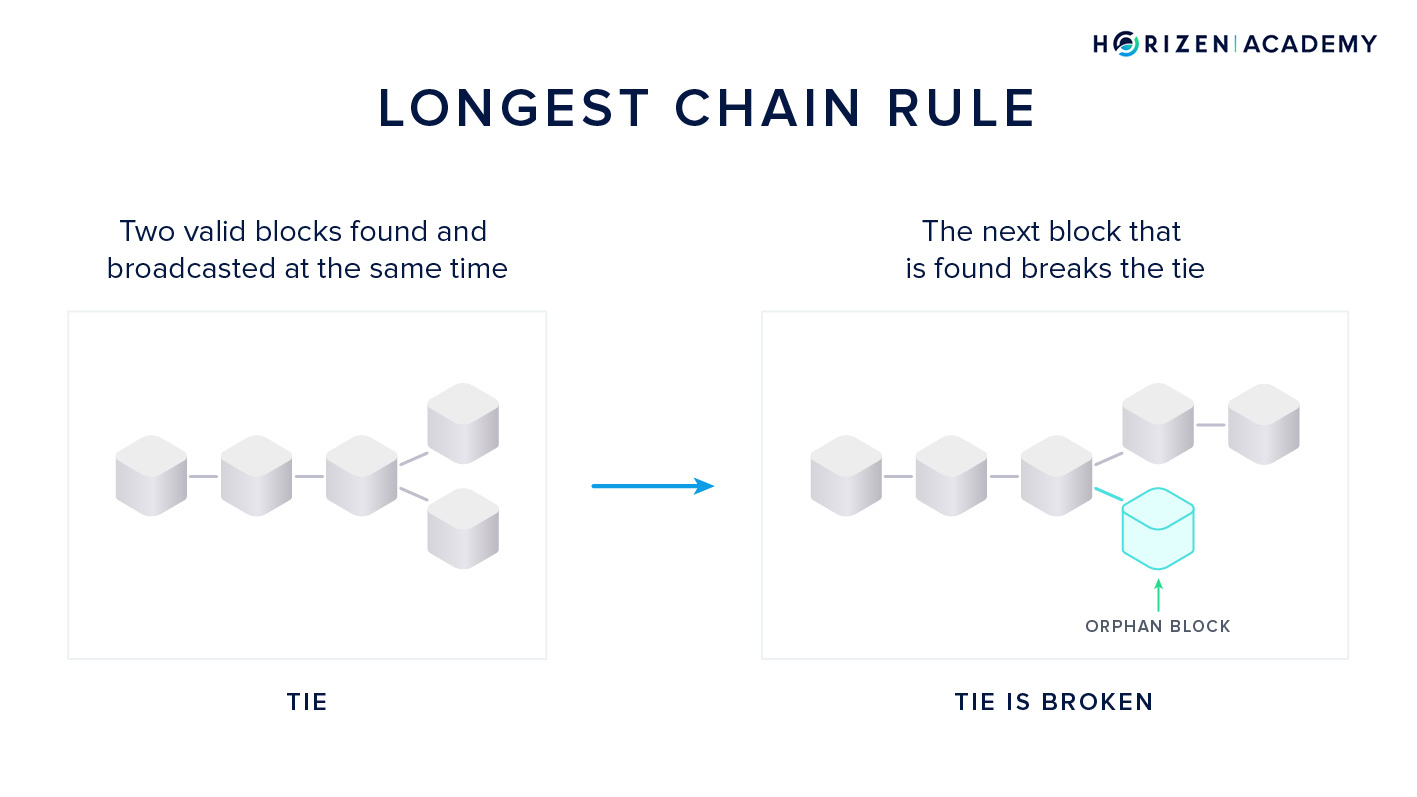 Proof of Work is one of the most secure consensus mechanisms but it is only secure if there is a sufficient amount of hash rate on the network. The Bitcoin protocol has proven how secure Proof of Work consensus can be for over 10 years. We already talked about game theory in our article describing blockchain as a protocol to transfer value and in the article on smart contracts.

Game theory “is the study of mathematical models of strategic interaction between rational decision-makers” (Wikipedia). Miners are rational decision-makers in a PoW blockchain. The incentives, to act according to the rules of the mining protocol are embedded in the protocol itself and outweigh the potential gains of behaving maliciously. This is what makes a mature PoW blockchain so robust.

In our article on mining, we will talk about this process in more detail and you will learn what the puzzle that we are talking about in the context of PoW is.

In a PoS blockchain, there are also entities collecting transactions and creating new blocks. The process, as well as the terminology in this setting, is a little different though.

To become a validator, a user needs to send funds in a special type of transaction. These funds are locked in a deposit called the validator pool and only released if the validator acts according to the rules of the protocol. If the validator were to include fraudulent transactions in his block, he would lose his stake and the right to forge blocks in the future.

The scarce resource in a PoS environment is the native currency of the blockchain. The more money you stake on a PoS blockchain, the higher your chances of validating a new block. In (most) Proof of Stake blockchains, there is no block reward. The validator’s incentive to do achieve consensus is solely based on collecting the transaction fees attached to each transaction.

Skeptics question the overall security of the Proof of Stake consensus model because it doesn’t consume real-world resources to be a validator. There is no cost associated with building a new block on top of both branches when there is a temporary fork. This is referred to as the Nothing at Stake attack.

In PoW, there is a real-world cost (electricity) to every block that gets mined. It remains to be seen if PoS blockchains can provide the same security guarantees over an extended period of time that Bitcoin with its PoW blockchain has shown for over a decade now. 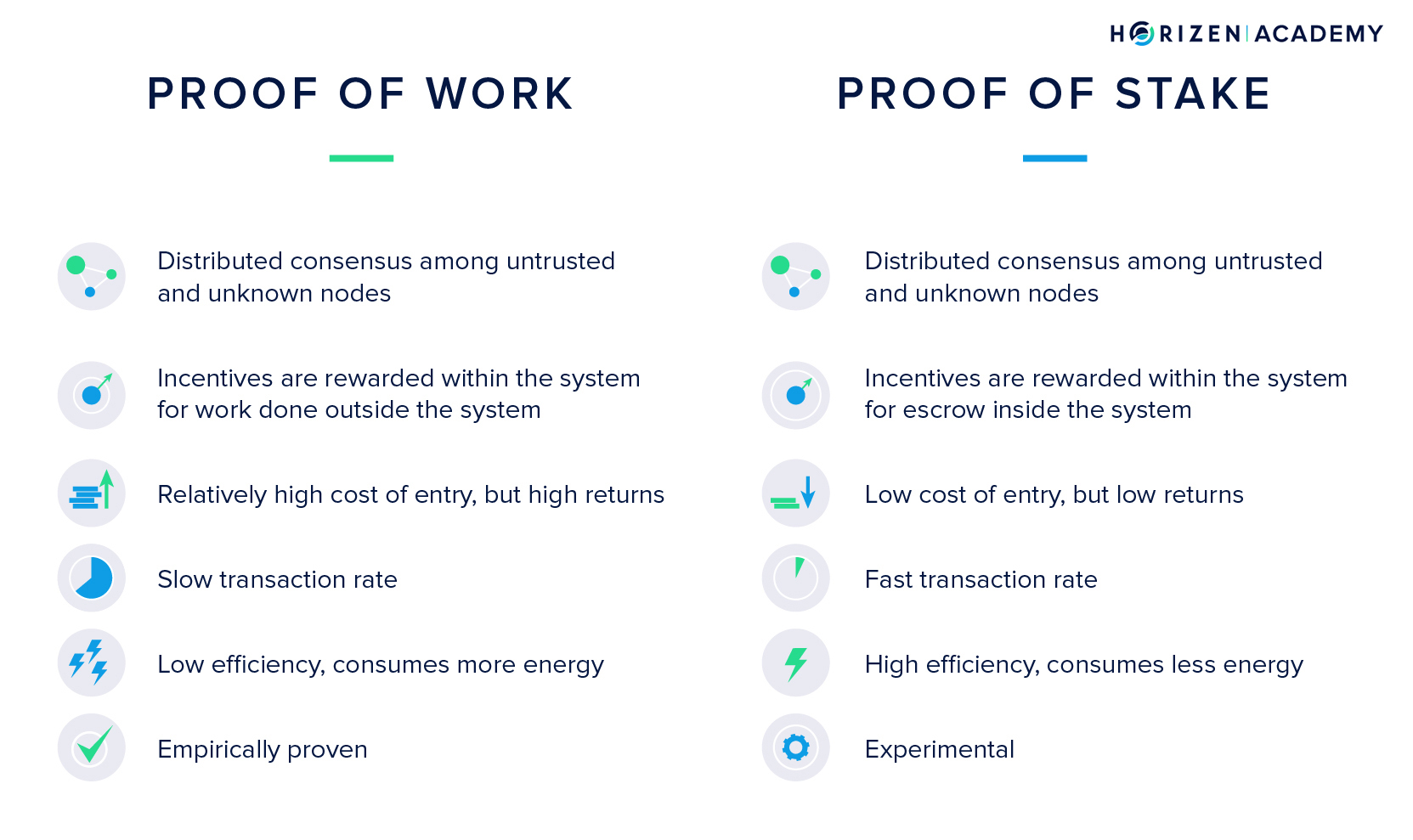 Another difference between PoW and PoS is that in a PoS blockchain each validating node needs to be identifiable. The staked coins must be held accountable for any malicious acts. In a PoW blockchain, there is no need to have miners or nodes identifiable. In fact, it is a feature, that if a node receives a block, there is no information included about who the miner of the block was. It might have been the node you just received the block from, or it might have been relayed several times before it reached you. It does not and it should not matter who the miner was. All that matters is that the block and all its transactions are valid. You only need to trust the math in order to trust Proof of Work.

Supporters of Proof of Stake refer to the high energy cost and limited throughput of PoW blockchains and thus consider the PoS consensus mechanism to be more sustainable. Right now there is no PoS blockchain available that can support the claim of being secure over an extended period of time while storing significant value. Time will tell if PoS blockchains can deliver on their promise of being equally secure while more scalable than PoW blockchains.

In our next article on mining, we will finally explain what the “puzzle” or “computationally expensive task” is, that we have been vaguely talking about up until now.

How Does Distributed Consensus Work?

― Preethi Kasireddy
What is so special about distributed systems and why do they need a consensus mechanism? An extensive article covering the intricacies of distributed systems.
https://medium.com/s/story/lets-take-a-crack-at-understanding-distributed-consensus-dad23d0dc95
English Español Français