The block explorer is a graphical tool to view and explore data on the blockchain. There is a block explorer available for almost every public blockchain. It allows you to browse the history of a given chain. It might be most interesting to go to the very start of blockchain technology and have a look at Bitcoin in this example.

If you know how to navigate one block explorer, you will know how to navigate all of them. It is quite intuitive and helps to understand how a blockchain is structured and how it works. To really appreciate this article you should be familiar with the basics of a blockchain, transactions, and mining. You can always skip back to one of our previous articles covering these topics if you are unsure about something. If you are familiar with how a blockchain works, this article should help you to connect some dots.

What You Will Find in a Block Explorer

The information that you will find in a block explorer is structured either by blocks, addresses or individual transactions. Let’s look into a first example to make all this more tangible.

There are a number of block explorers out there, oftentimes several versions for the same blockchain. Since we want to go all the way back to the beginning of cryptocurrencies in this example we will look at Bitcoin and use one of the most popular explorers out there .

You will see an overview of the most recently created blocks on the landing page. Let’s go through what we see here: 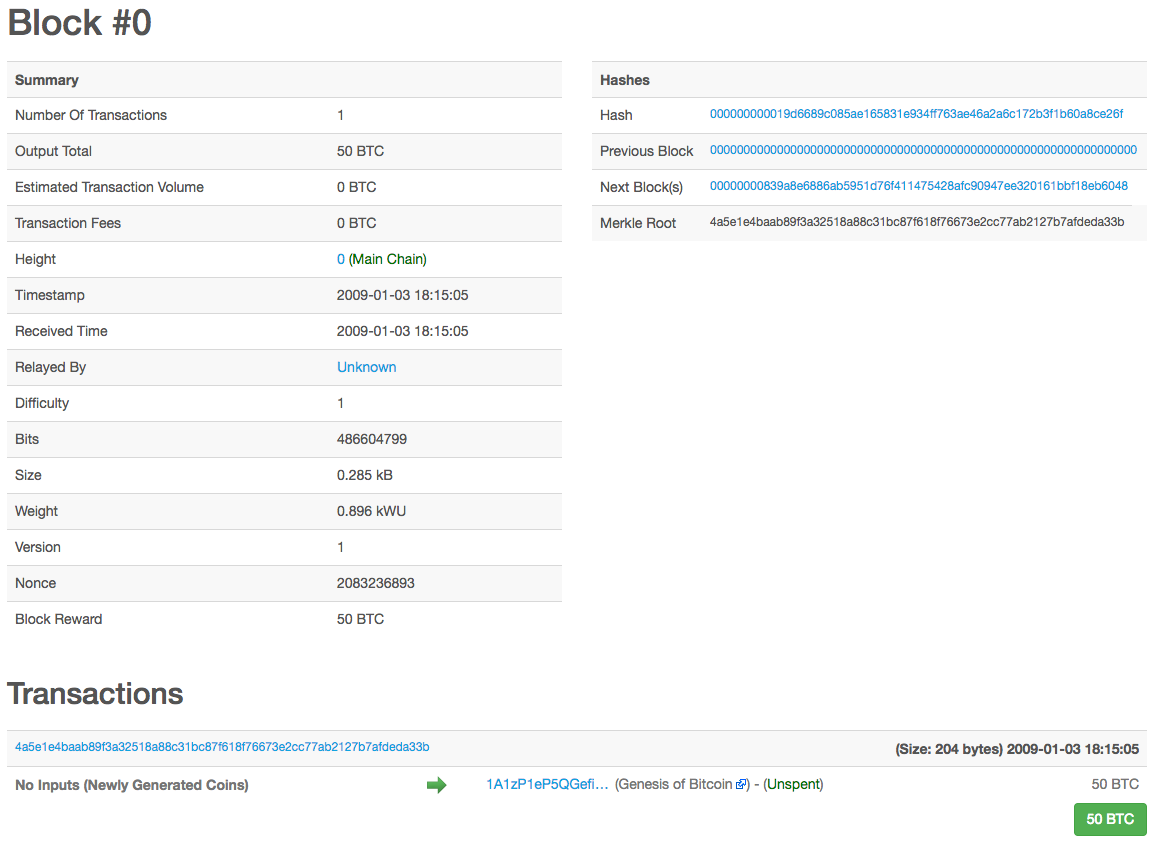 Let us go through the information we can find here. The genesis block contains only one transaction. This is the minimum amount you will see since every block has a so-called coinbase transaction, the transaction that is used to issue new bitcoins to the miner that solved the block to reward them for their efforts.

The reward for mining Bitcoin, in the beginning, was 50 BTC. The block reward reduces by half every four years (more precisely every 210,000 blocks). This has happened twice so far. A miner today receives 12.5 BTC per block.

Other than the transaction that rewarded the miner (Satoshi Nakamoto himself in this case) there is no transaction in this block, that is why the estimated transaction volume is 0. Today there is a transaction fee attached to most transactions, but this wasn’t always the case, especially when the network was still in its infancy.

We have talked about the height before so we will get to the timestamp now. The first bitcoin was mined on the 3rd of January 2009, the birthday of the very first cryptocurrency.

The “Relayed By” field shows who mined the block. Today’s mining pools and their reward addresses are mostly known. This is how the block explorer “knows” who mined the block: it compares the address that received the newly generated coins (1A1zP1…) in the coinbase transaction with a number of known addresses from mining pools. In this case, we do know who the miner was, although the block explorer doesn’t tell us: Satoshi Nakamoto himself.

Bits, Size, and Weight all refer to the size of the data of a given block, not too spectacular. Version refers to the software that was run at the time the block was created.

Now we get to another interesting information: the Nonce. When miners try to solve a block, what they are doing is putting different values in the Nonce (Number used once) field and calculate the hash of the block. If the result doesn’t have the minimum amount of leading zeros required (most often it will have none at all) they increment the nonce and hash the block again. This is repeated until a miner finds a nonce that produces a hash below the target. In the case of the very first block, Satoshis computer tried more than 2 Billion values (if he started at 0) before he found a value that produced the desired result. He received the very first 50 bitcoin as a block reward for this.

If we want to look at the very first cryptocurrency transaction ever done we need to go to Block #170, where Satoshi Nakamoto sent Hal Finney 10 BTC.

We hope this article helps you navigate the block explorers of this world. We encourage you to play around with this for a while. I know it helped me a lot with understanding how the information in a blockchain is organized.