If you want to exchange one cryptocurrency for another one you will most likely go to one of the centralized exchanges. First, you have to check, whether the exchange offers the trading pair that you are interested in. Then you transfer your funds to their address, which requires you to trust the exchange as a third party. Most exchanges offer BTC and ETH pairs. To swap two lesser-known cryptocurrencies or tokens, you will oftentimes have to buy bitcoin first which you will then convert into the desired cryptocurrency.

A special transaction type that we would like to talk about in this article is the Atomic Swap. It is a type of transaction that touches on the topics of scalability and interoperability at the same time.

Atomic Swaps are a technology that allows you to trade Peer-to-Peer without a third party. They also do away with the trust required for you to arrange a swap with an unknown user. Someone would have to send their funds first, and the counterparty could decide to not fulfill their side of the deal. Atomic Swaps enable peers to do a trustless exchange of different currencies according to predefined and agreed upon conditions without having to fear losing their funds.

The Technology Behind Atomic Swaps

From our article on public-key cryptography, you know that a valid transaction requires a signature. This signature can only be created by the person that has access to the private key. When you send a transaction you usually sign it and broadcast it to the network afterward. HTLCs are based on a technology called state channels. We explain those in detail in our Expert Level, but for now, all you need to know is that they allow you to exchange signed transactions securely. Only once the participants decide they are done transacting, the final state is broadcast to the blockchain.

The “Hashed” part of HTLC means that a hash serves as a lock for the contract, to protect it from a third party accessing it. The “Timelock” part refers to the contract having an expiration date. Two conditions must be met to perform an Atomic Swap between two crypto assets: Both assets and their underlying blockchain need to support the same hashing algorithm, like SHA-256 in the case of Bitcoin and both blockchains need to support some kind of programmability, that allows an HTLC to be deployed.

The process of an Atomic Swap would generally look like the following. Let’s assume Alice has some BTC and Bob has some ZEN. Both agree to swap a certain amount of their assets. 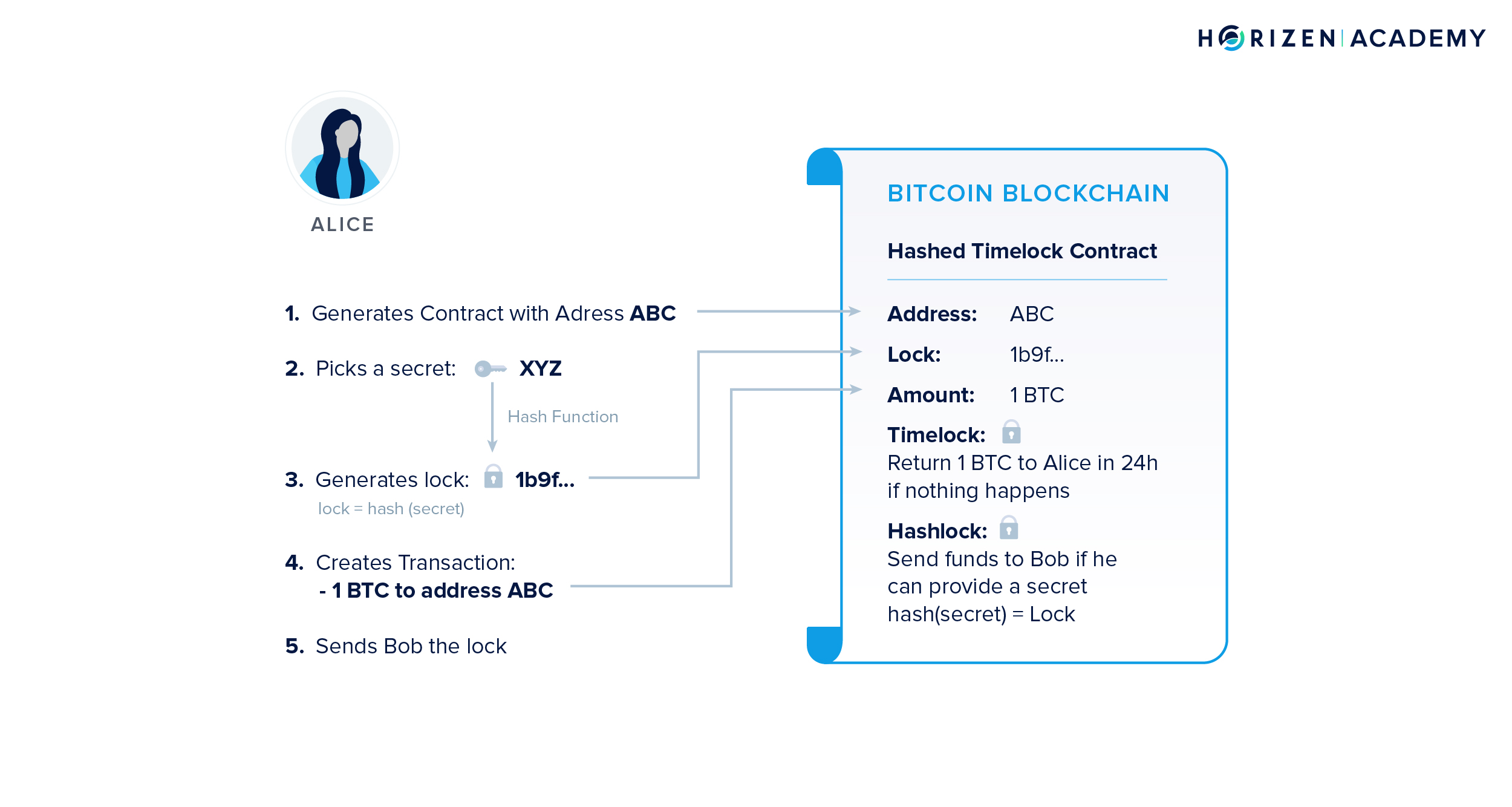 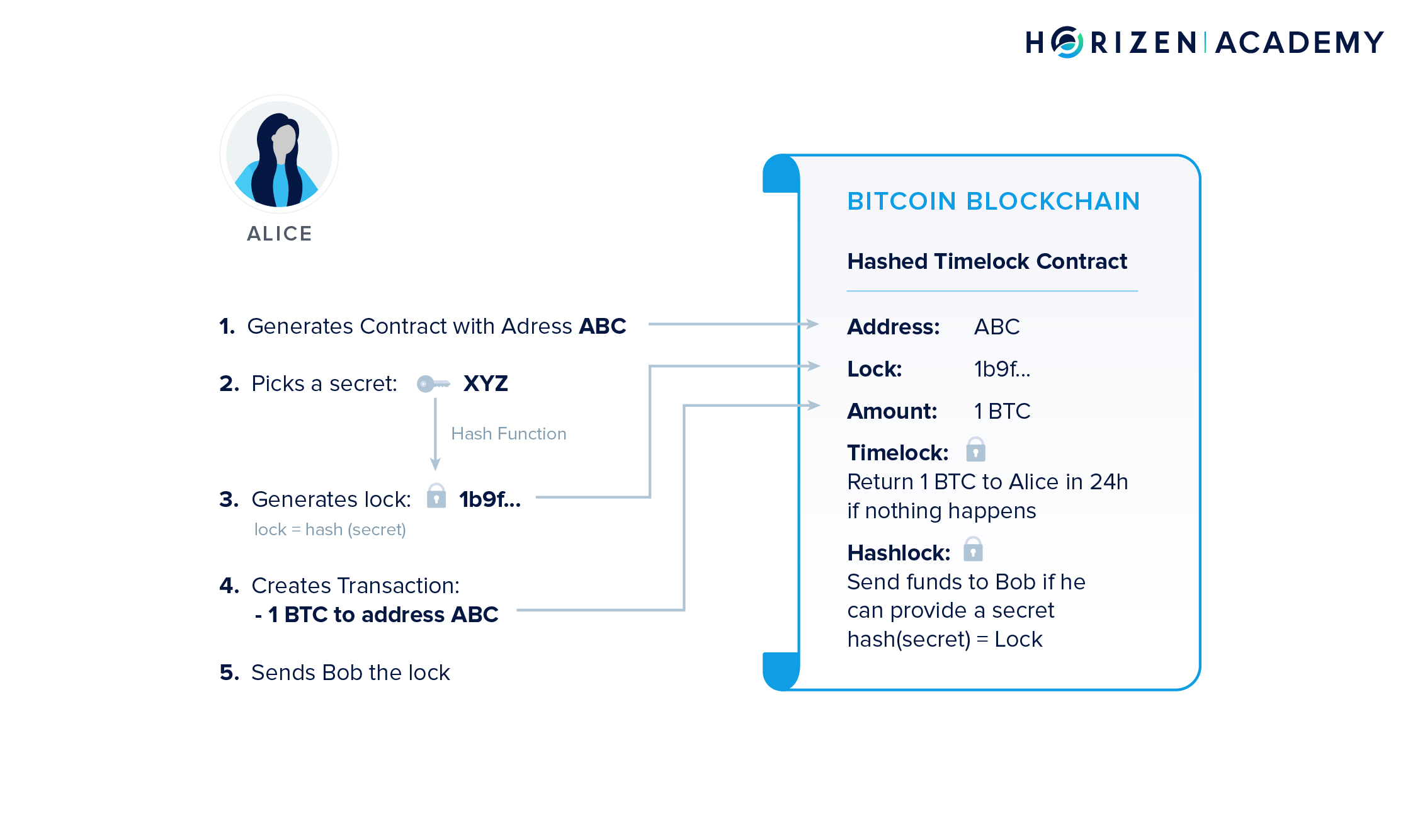 First, Alice creates an HTLC on the Bitcoin Blockchain that we will simply call contract. The contract comes with an address, otherwise, you could not interact with it. Next, Alice generates or picks a secret - in this example her secret is XYZ. Using a hash function she generates a lock (here: 1b9f…), which is simply the hash of the secret. Now she deposits the amount of bitcoin she and Bob agreed to exchange in the contract where they are locked. Lastly, she sends the lock to Bob.

The contract can enforce two outcomes: 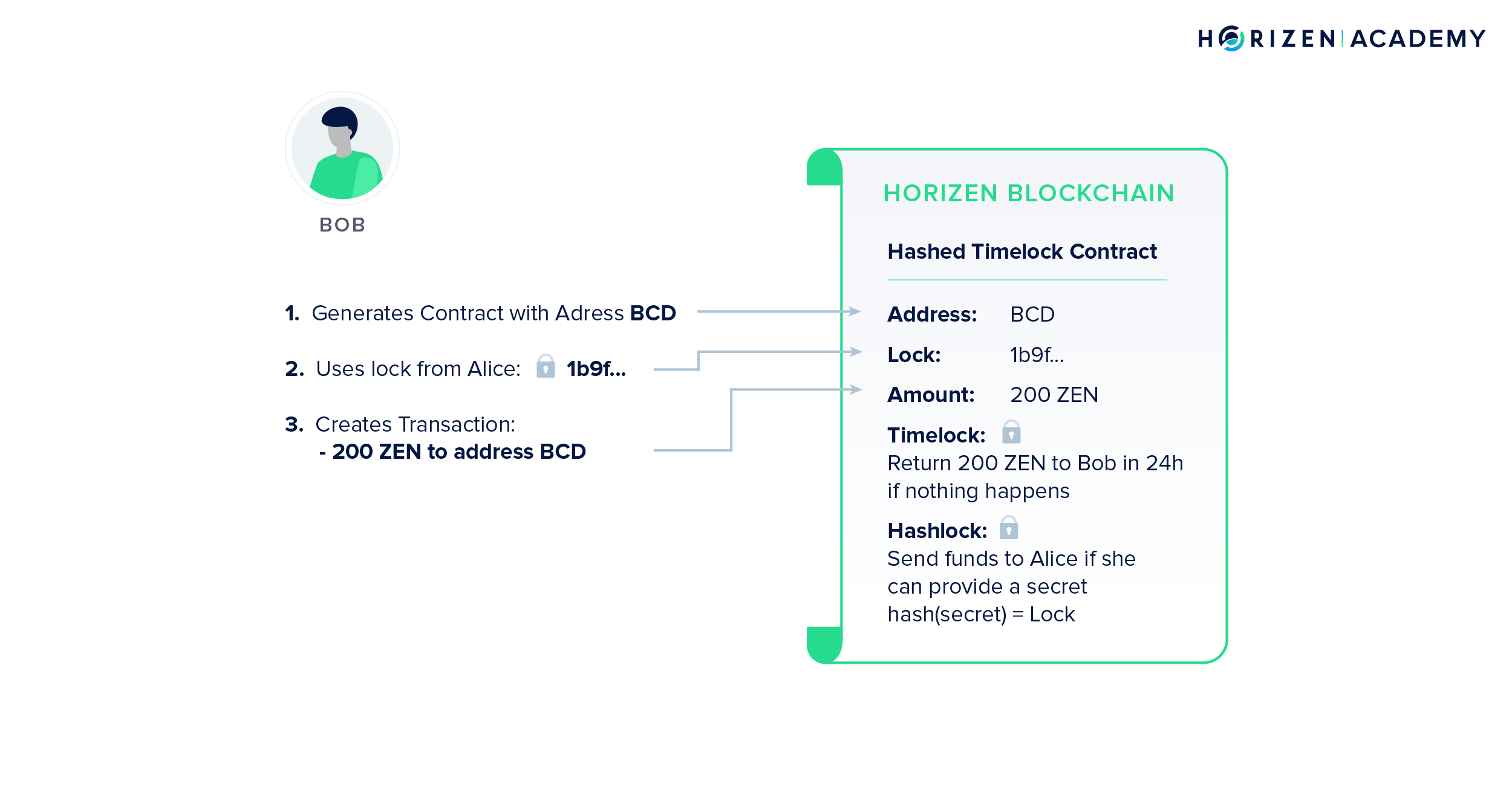 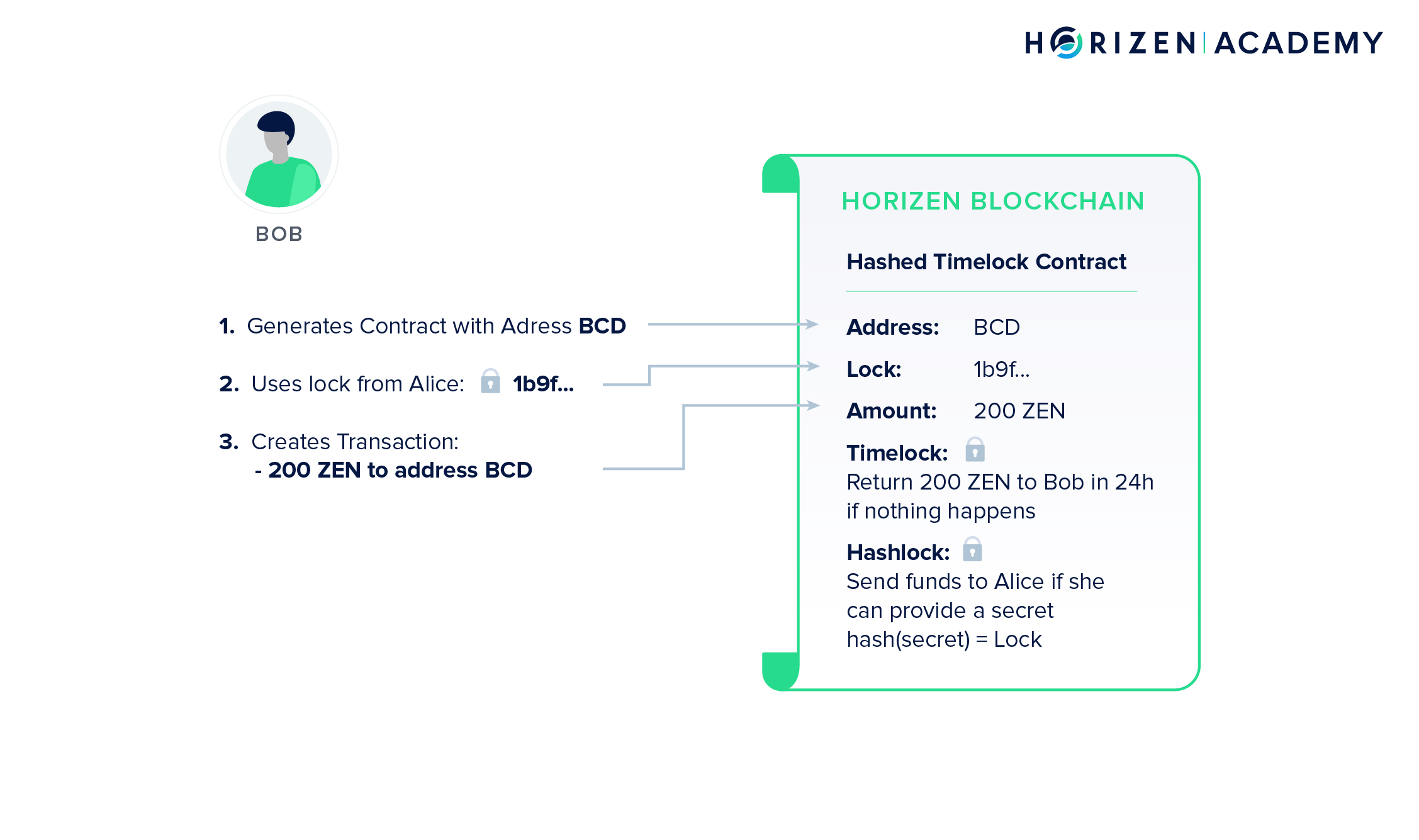 Bob also creates a Hashed Timelock Contract, but this time on the Horizen blockchain. His contract also has an address, BCD in this example. Alice sent him a lock (the same one she used) so he goes ahead and locks his contract with the same lock. Lastly, he deposits the amount of ZEN the two agreed to exchange. Just like the contract Alice created, Bob’s contract can execute in two ways: either Bob gets refunded after a timeout period or Alice provides the secret and the funds are distributed to her address.

Now both contracts are set up on their respective blockchain. Alice has to take the next step within the locking period, otherwise, both are refunded at nothing happened at all. 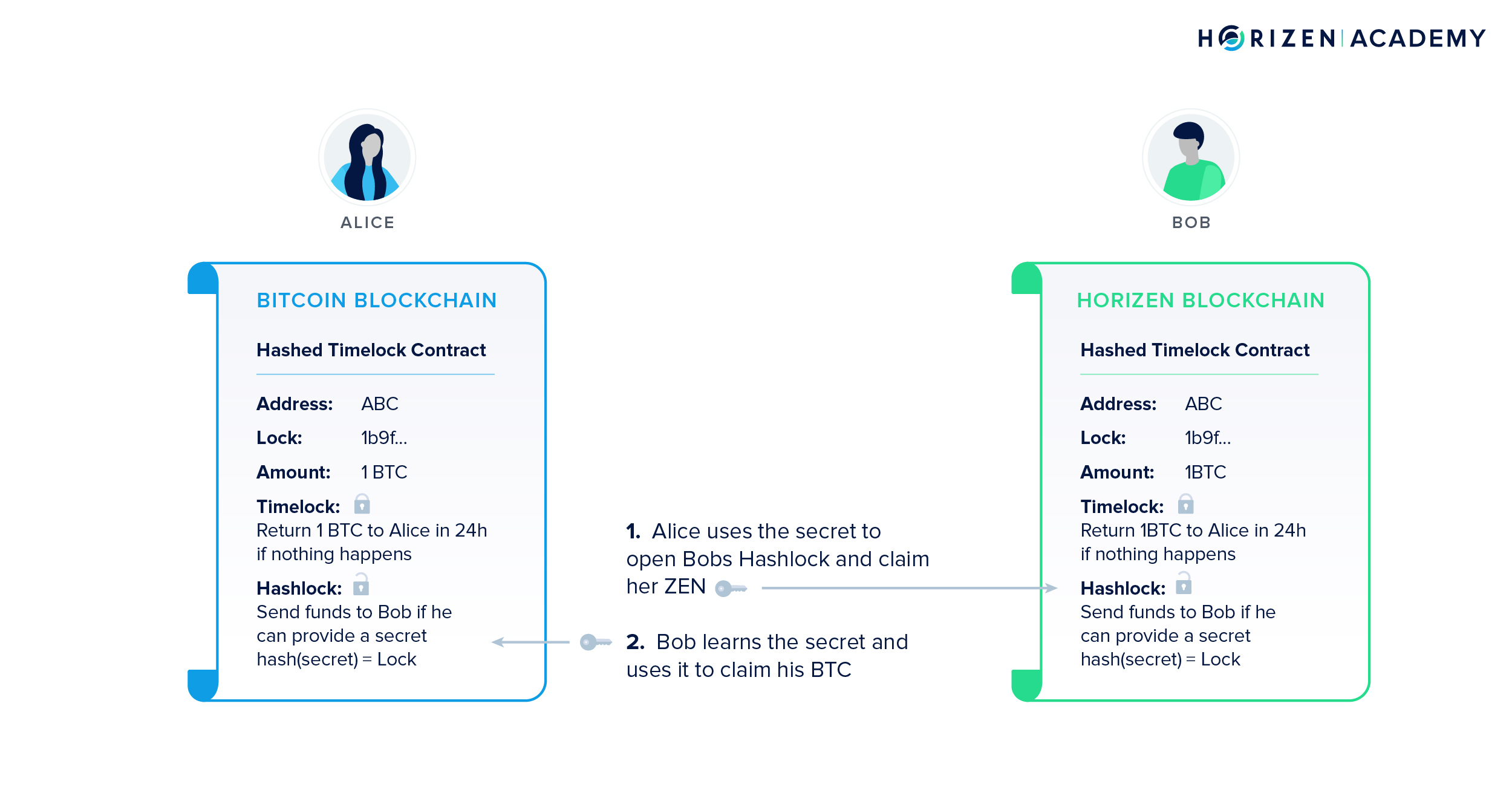 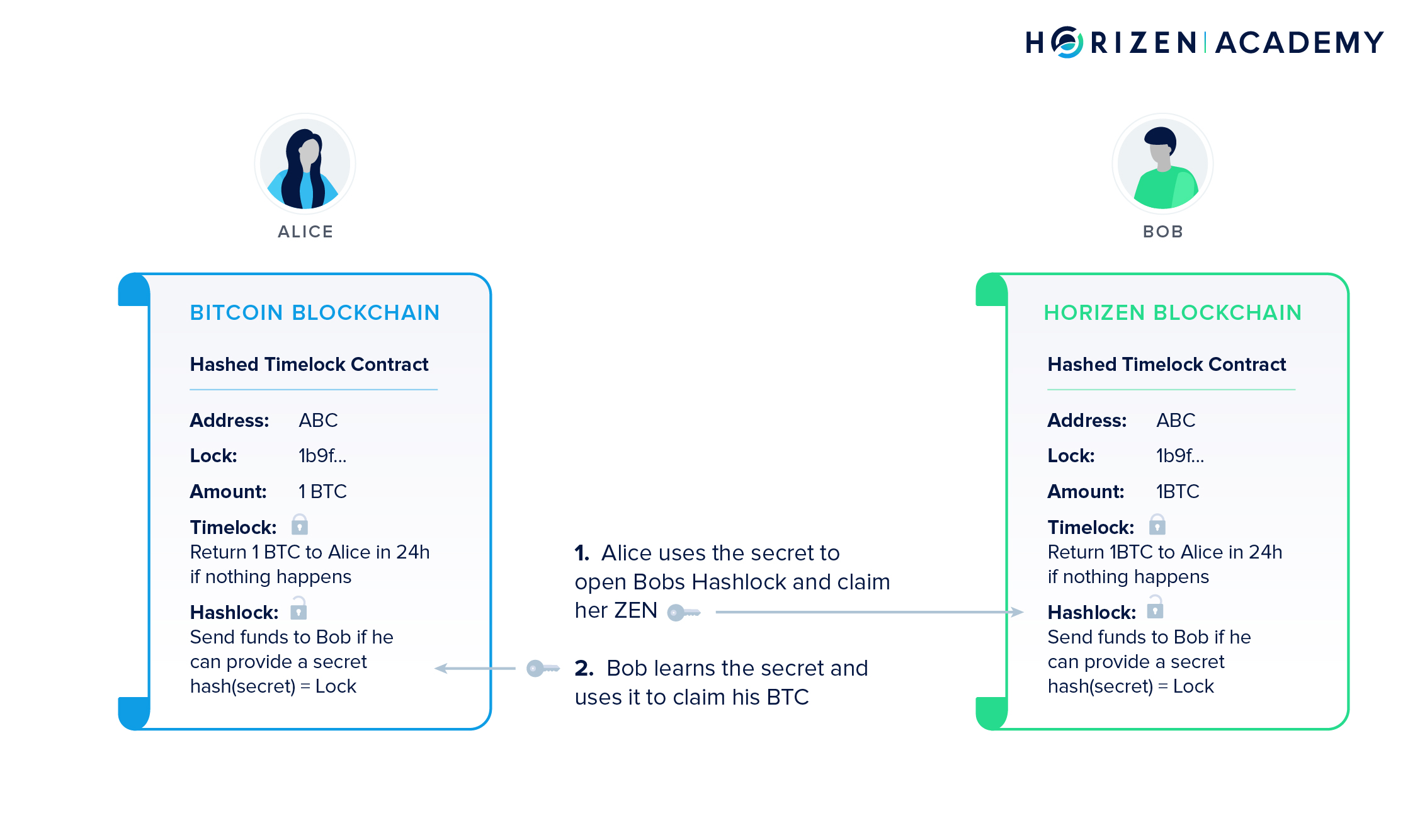 Alice will now use the secret she chose earlier to unlock the hashlock of Bob’s contract on the Horizen blockchain and the ZEN will be released to her. This is a public operation, auditable on the blockchain. Bob can, therefore, see the secret now, and uses it to unlock the bitcoin locked up in Alice’s contract. By providing the secret the HTLC will automatically release the funds to Bob’s previously specified Bitcoin address.

Without having to trust each other Alice and Bob have now successfully exchanged their coins, without having to involve a middleman. At no point could one of the two steal the other’s money. When Bob receives the lock from Alice, he can verify that she used the same lock by looking at the Bitcoin blockchain. If Alice would not redeem her ZEN, then both of them would automatically get refunded. And Alice cannot claim Bob’s ZEN without Bob learning the secret.

There are few wallets that enable users to do Atomic Swaps, yet. So far there have been only a small number of Atomic Swaps completed. Here is a short list:

Atomic Swaps present an alternative to the centralized exchanges used today. At no point is there a third party involved that has access to a user’s funds. The exchange process is entirely trustless and almost instant. Hashed Timelock Contracts are the heart of Atomic Swaps. I suspect that it won’t take long until Atomic Swap compatibility will be a necessary feature for a blockchain to gain serious adoption.

This was the last article on transactions in the Advanced Level. To learn more about how transactions work and what types of transactions there are you can visit our Expert Level. Here we will continue with an introduction to privacy-preserving techniques on the blockchain.

― Faisal Khan
An overview of Atomic Swap integrations and the benefits as well as drawbacks of the technology.
https://medium.com/datadriveninvestor/atomic-swaps-the-interoperability-revolution-in-cryptos-f7ddf1381d47

Everything You Need to Know about Atomic Swaps, and How Komodo is Advancing the Technology

― Komodo Platform
A timeline of Atomic Swaps and an outlook on what this means for decentralized exchanges.
https://medium.com/@komodoplatform/everything-you-need-to-know-about-atomic-swaps-and-how-komodo-is-advancing-the-technology-cadaec50da7c