The term altcoin stems from a combination of ‘alternative’ and ‘coin’ in the sense of cryptocurrency coin. All cryptocurrencies besides Bitcoin are referred to as altcoins in the crypto universe. Horizen’s native currency ZEN is an altcoin by that definition. Bitcoin is open-source software and anybody is free to use the code for whatever purpose he likes. Not surprisingly the vast majority of altcoins are derived or forked from Bitcoin.

The first notable altcoin, Namecoin, was based on the Bitcoin Code. It kept the original maximum supply of 21 million in place and also didn’t change the Proof-of-Work Algorithm. It primarily diverged from Bitcoin in introducing user domains. Another early altcoin was Litecoin. Litecoin raised the maximum supply to 84 million LTC. It kept the block reward from Bitcoin but decreased the block time from 10 to 2.5 minutes. The same block reward issued four times as often, results in a four-fold increase in total supply. The mining algorithm for Litecoin was also changed (from SHA256 to Script).

Reasons to Launch an Altcoin

You might ask yourself why there are so many altcoins or cryptocurrencies out there. The main reason is that different people have different opinions about what the “ideal” cryptocurrency looks like. There are many parameters to tweak in a blockchain protocol. You can change the total supply, the issuance schedule, the block creation time and many other factors.

In order to apply those changes to an existing project, you have to convince a majority of participants that these changes will benefit the blockchain and all participants. Few people have the mandate to suggest such changes, especially if they just joined a blockchain project and haven’t built a reputation for improvements yet. Changing a single parameter is difficult enough and takes a lot of time and consensus building. If you envision a blockchain with a bunch of changes applied to it, it is easier to clone the software and start a new project, instead of convincing the developer community to change the original codebase.

The Cambrian Explosion of Cryptocurrencies

It is a positive development to see such a large amount of different approaches to solving the same problem: building a censorship-resistant, permissionless and decentralized electronic cash system. The development we have seen over the last years is similar to the Cambrian Explosion, an event (or better a time span) about 541 million years ago, during which a huge variety of life forms developed. This ultimately led to the diversity of life that we are seeing on earth today. Through natural selection, only the fittest species survived and evolved into the species still roaming the earth today.

We might see a similar development in the crypto-space. Right now there are many different implementations of the same idea being tested and the best functioning ones will most likely survive, while a lot of the “unfit” projects will go extinct. This is a necessary development. You cannot know for sure if an idea works if you haven’t tried it out.

The image below was taken from the MapofCoins which is still being maintained today. 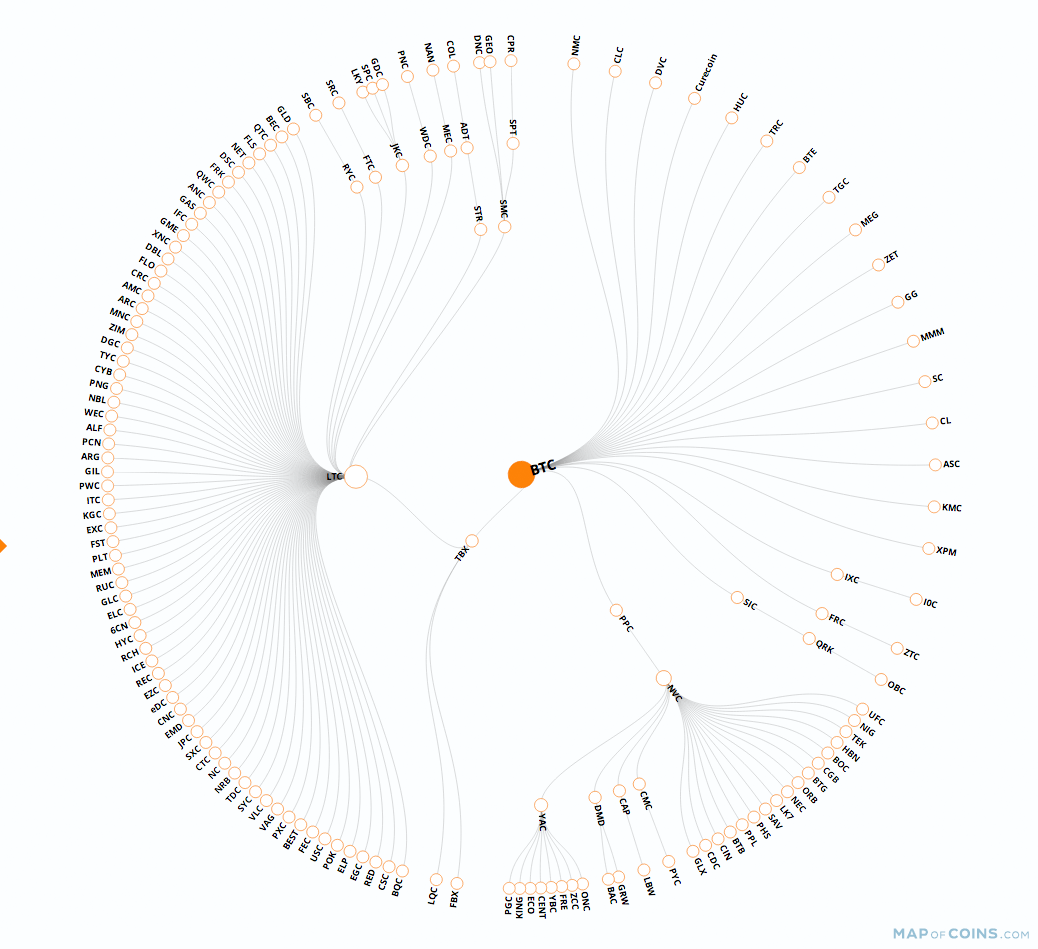 How to Research Altcoins

We want to show you where you can start looking at the different altcoins. Probably the most visited website in the crypto space is CoinMarketCap. It shows you the price of most cryptocurrencies and tokens out there, together with a bunch of other information such as links to their websites. They also let you look at historical price data and simple charts.

CryptoCompare too has price data on various coins but also includes detailed information about each individual blockchain. From there you have a good starting point for additional research.

In the next and last article of our history section, we will look at how our project, Horizen, started and evolved over time. It is a great article that a large number of our team members have worked on together. After that, we will get into the technology behind cryptocurrencies.